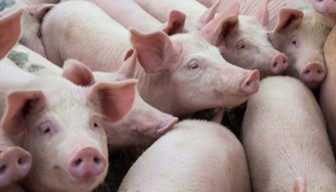 Oxygen from the air (O2) is a highly reactive molecule. It interacts with many others to exchange electrons. These exchanges are sometimes incomplete and cause the appearance of particularly unstable molecular entities: free radicals (Figure 1). These entities will then react with their environment and break many molecules of interest: proteins, DNA, … while continuing the production of other free radicals (chain reaction). If this deleterious mechanism is not quickly stopped (defence mechanism below), oxidative stress will lead to cellular dysfunction and premature ageing or even pathologies.

The main free radicals present in the body (Beaudeux & Vasson, 2005)

A diet rich in polyunsaturated fats presents a high risk of oxidation, beyond the rancid taste that will cause a drop in consumption, the free radicals resulting from this fat oxidation will attack the body and cause oxidative stress. This damage will have to be repaired and will be costly in energy and performance. Otherwise, the animal will weaken, age prematurely or see its health deteriorate.

Radiation, the other exogenous origin…

Metabolism, an endogenous and normal origin of oxidative stress

Most metabolic reactions are redox-type reactions that can generate free radicals, in particular, the respiratory chain within the mitochondria. It is therefore difficult to imagine directing the metabolism towards a reduction in the production of these free radicals. On the contrary, our farm animals, which are very efficient, have a particularly high metabolism which in fact induces a high production of free radicals. Animals with high potential are therefore particularly sensitive to oxidative stress.

Immune defenses use free radicals as a weapon of defense against infection.

Although oxidative stress is generally harmful, the body also knows how to use it to its advantage. The immune system will produce free radicals specifically during infection and this in the vicinity of infectious agents. This mechanism deregulates the functions of the infectious agent and blocks the infection naturally.

Fortunately, the body is not helpless in the face of oxidative stress. It has a vast arsenal of tools at its disposal to stop the spread of free radicals and repair the damage caused by oxidative stress. These natural defence mechanisms can be divided into 3 categories (Figure 3):

The different tools of the body to reduce oxidative stress in animals (Durand et al., 2013) 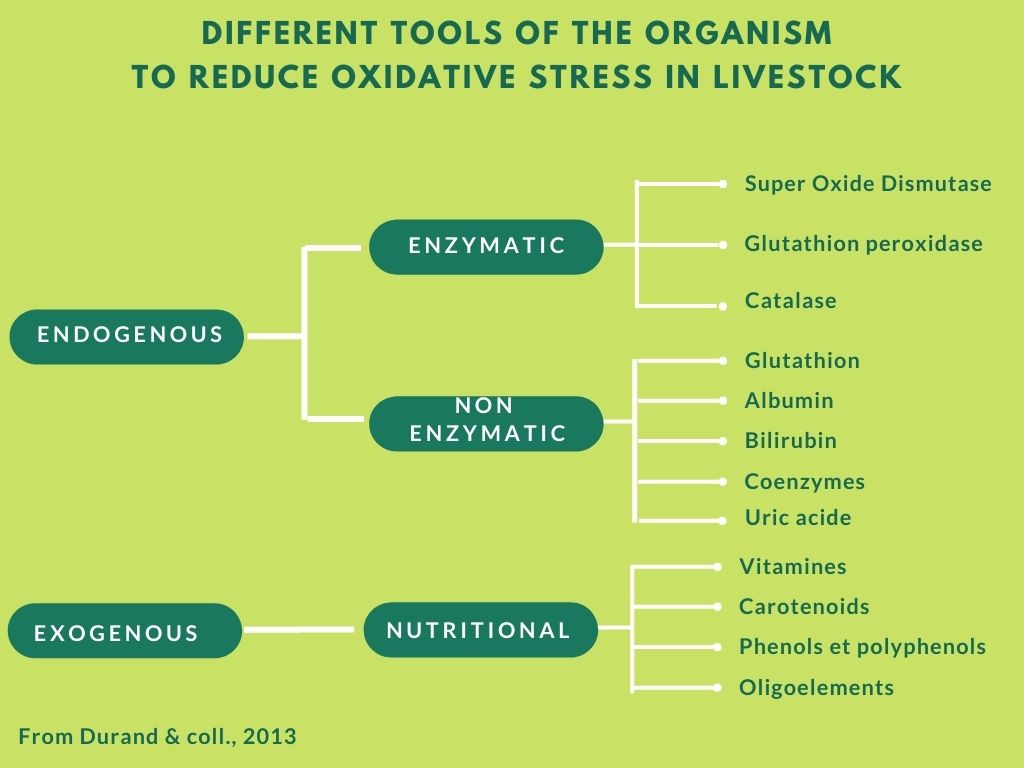 Not only does the organism have trap molecules (GSH, Q10, …) to stop free radicals but it is also able to regenerate these molecules thanks to several anti-oxidant enzymes (SOD, GPx, …). Vitamins (ACE) as well as trace elements (Ce, Zn) will be able to complete this trapping and regeneration work. Certain compounds such as phenols can regenerate vitamin E for example.

3.      Are antioxidant additives still of interest?

In normal situations, the body is perfectly equipped to cope with oxidative stress. On the other hand, in our farms, there can be sources of excess exogenous free radicals (food or radiation), our high-performance animals go through particularly critical physiological stages: peri-partum, weaning, high production levels, vaccination, infection.

During these critical phases to maintain animal health and performance, it is recommended to support the animal. In order to strengthen the animal and allow it to pass through this phase of oxidative stress, 3 distinct pathways should be considered:

The use of antioxidants in feed is becoming increasingly difficult. Ethoxyquin is now banned in Europe, other synthetic molecules are still authorized but are already suspected of disturbing the health of the final consumer. The natural antioxidants allowed in feed are either expensive or too sensitive to heat treatment.

Vitamin E is recognized as a powerful antioxidant. In fact it is prescribed a lot in cases of suspected oxidative stress, we almost forgot that its name “tocopherol” indicates from Greek to carry the offspring. Vitamin E is therefore essential but optional for oxidative stress because it must be compared to other available molecules. Moreover, if its antioxidant power is constant, its price is particularly volatile. So why not keep vitamin E for its vitamin role and find other antioxidants that are less volatile and just as effective?

The regeneration of vitamin E makes it possible to benefit from the effectiveness of vitamin E without having to undergo as much of its fluctuating courses. Phenols are good candidates for this. However, they remain fragile.

There are several ways to prevent oxidative stress. Many additives can come into play. In order to be able to fully determine oneself, one must be able to measure the effects of oxidative stress and antioxidants in vivo. Before embarking on expensive field tests, one always starts with an in vitro screening to compare the candidates on their antioxidant power. But which method to choose for these in vitro tests? Which indicators to rely on in vivo? We will address these issues in the very near future.

LinkedIn
PrevPrécedentWhy is the consumption of starter feed crucial just after hatching?
SuivantSustainable development: what will be the impact of the Green Deal for Europe on animal production?Next 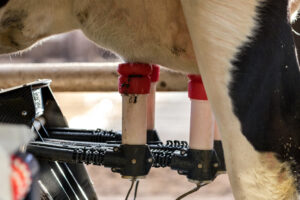